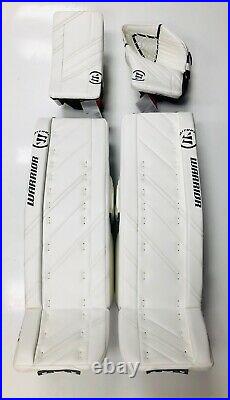 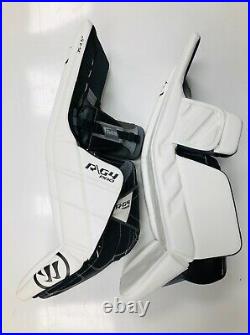 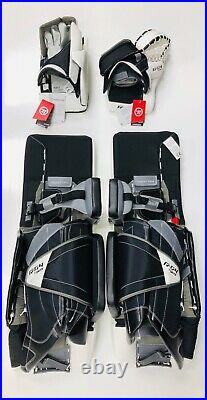 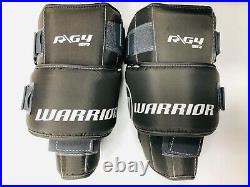 You are looking at a Brand New Pair of Warrior G4 Pro Senior Hockey. The pads are size 35+1.5 (Please see size chart below). The Glove and Blocker are both SR size.

The set colors are Primarily White with White accents as shown in the pictures. Please note these pads include a Brand New set of Warrior Ritual G4 SR Knee Guards (shown above).

The G4 is built to bring ultimate performance, function and durability all while being the lightest gear on the market. Starting with the inside edge, the Ritual G4 now features AIRslide technology which features two main channels across the knee wing and three channels across the inside sliding edge. AIRslide is designed to decrease friction by reducing surface area that contacts the ice.

Not only will the AIRslide promote sliding on clean ice, but it will help drive the goalie for consistent slides even on rough and snowy ice that shows at their end of a session. Next, there are micro adjustments on the strapping and leg channel of the pad, which features removed foam along the connection point on the back of the pad which will make the pad will sit a bit looser on the outside of the leg, without having to loosen up the straps.

This will allow the pad to hang and drop faster to the inside edge, thus promoting faster closure of the five hole. The name of this new technology is their 360 degree Active Drop system.

Lastly, the large outer calf strap is now adjustable which gives the goalie the opportunity to choose a tight connection to the back of the pad or a looser which, all depending on their preference. On the outside of the calf, the G4 now features a newly redesigned outer Post Wedge which is thinner like the GT but features the same shape as the older G3.

The outer knee flap can be adjusted in a wider location, giving more adjustment options for goalies that wear larger knee pads but do not want to angle the knee strap down to the calf. Moving through to the face of the pad, Warrior has added HyperComp material throughout the entire face adding rigidity and shape to the pad. This addition helps the pad flex and curve, but it will not breakdown or settle throughout use.

Throughout the toe section of the pad, the G4 pad comes stock with Active Response toe and boot straps which will give the goalie a tight connection with proper stretch to give the goalie crisp movements. Finishing off the pad, there is a wider visual look which is due to the new graphic placement coupled with the thinner outer roll. This specific technology is named the RVH Optimized outer roll which features distinctive designs conducive to better RVH positioning/locking. The outer roll stays thin at the top of the pad and thin down by the shin and boot to give a good seal and overlap at the thigh and reducing the negative open space created by conventional outer rolls, when sealing the post in RVH. In comparison to the Warrior Ritual G4 Senior leg pads, the G4 Pro will feature upgraded internal foams including HyperComp.

If you are a goalie who is looking for the lightest pad on the market, coupled with leg channel and sliding improvements, the Warrior Ritual G4 Pro Senior is the pad for you. Starting internally, the G4 glove features HyperComp reinforcements throughout the glove to provide even more palm protection, yet still keeping the snappy shut and feel that goalies loved in the G3. Aiding in the closure of the glove, Warrior has kept the AxyFlex system in the T of the glove which has the ends of the T feed deep into the perimeter of the thumb and fingers side of the glove. Despite the T system remaining the same, the T itself has been trimmed down ever so slightly along the perimeter and even stiffened up along the Spine to give the best overall shape and visual presentation that Warrior could offer. Moving through to the backhand of the glove, Warrior has revamped the backhand design to resemble a connection much like the GT.

The G4 Pro has a crisp look due to the full clean construction build. This design features less sewing lines in the construction process which helps add increase durability and longevity. The blocker is built close to a GT base with a shortened replacement cuff on the inside edge and the larger index finger protection/sidewall.

Adding in even more index finger protection, there is now a removable padded rail that helps sit comfortably on the stick and helps prevent the index finger being jammed from any pucks that might ride up the stick. This piece can be adjusted and moved up, down, side or completely taken off based on the goalies preference. Continuing with the design of the previous lines, the G4 still includes a fully removable palm and liner which can be adjusted up or down depending on the goalies preference. This adjustment gives the goalie the ability to dial in a perfect fit for their style of blocker. Also, it gives the goalie the ability to remove their liners so they can be air dried, washed or replaced throughout the life of the blocker. In comparison to the Warrior Ritual G4 Senior blocker, the G4 Pro will feature upgraded internal foams including HyperComp. If you are a goalie who is looking for the lightest blocker on the market, coupled with better wrist movement and index finger protection, the Warrior Ritual G4 Pro Senior is the blocker for you. Warrior Goalie Pad Sizing Take the following measurements: 1 Floor to mid-point of knee cap = [A] inches 2 Mid-point of kneecap to desired height on thigh= [B] inches 3 Skate size x 0.75 = [C] (only use up to size 10 skate as goal skate cowlings do not get larger over size 10) Recommended pad size is [A] + [B] + [C].

Not the size or color you're looking for? Add each item to your cart. Based on your entire order. The item "New Warrior G4 Pro Senior Hockey Goalie Blocker Catcher Leg Pad Set size 35+1.5" is in sale since Tuesday, October 27, 2020. This item is in the category "Sporting Goods\Team Sports\Ice & Roller Hockey\Clothing & Protective Gear\Goalie Equipment\Leg Pads".

The seller is "hockeyplusmore" and is located in Niagara Falls, New York. This item can be shipped worldwide.