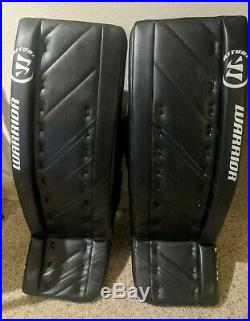 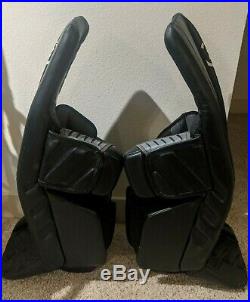 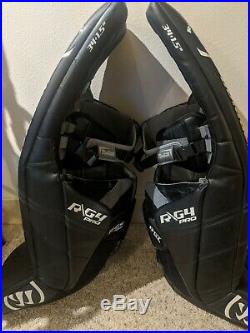 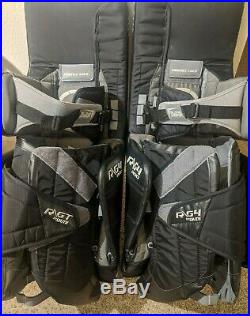 This is the current top of the line butterfly hockey goalie pad from Warrior! These pads are slightly used, only having a handful of puck marks and barely stretched elastic toe & boot straps. The pads are just barely "broken in". Please see the pictures for proof. They measure a senior size 34+1.5 and come in all black with white logos.

They do not come with knee guards. For more information on the pads, I've copied the product description from Goalie Monkey below. If you have any questions, feel free to ask!

As always, don't forget to check out my other auctions. Brand new for 2018, Warrior Sports has unveiled their fourth iteration of the Ritual line dating all the way back to the Ritual G1 which debuted in 2012. Building off of the massive success of the G3, the G4 is built to bring ultimate performance, function and durability all while being the lightest gear on the market. Starting with the inside edge, the Ritual G4 now features AIRslide technology which features two main channels across the knee wing and three channels across the inside sliding edge.

AIRslide is designed to decrease friction by reducing surface area that contacts the ice. Not only will the AIRslide promote sliding on clean ice, but it will help drive the goalie for consistent slides even on rough and snowy ice that shows at their end of a session.

The outer knee flap can be adjusted in a wider location, giving more adjustment options for goalies that wear larger knee pads but do not want to angle the knee strap down to the calf. Moving through to the face of the pad, Warrior has added HyperComp material throughout the entire face adding rigidity and shape to the pad. This addition helps the pad flex and curve, but it will not breakdown or settle throughout use. Throughout the toe section of the pad, the G4 pad comes stock with Active Response toe and boot straps which will give the goalie a tight connection with proper stretch to give the goalie crisp movements.

Finishing off the pad, there is a wider visual look which is due to the new graphic placement coupled with the thinner outer roll. This specific technology is named the RVH Optimized outer roll which features distinctive designs conducive to better RVH positioning/locking. The outer roll stays thin at the top of the pad and thin down by the shin and boot to give a good seal and overlap at the thigh and reducing the negative open space created by conventional outer rolls, when sealing the post in RVH. In comparison to the Warrior Ritual G4 Senior leg pads, the G4 Pro will feature upgraded internal foams including HyperComp.

If you are a goalie who is looking for the lightest pad on the market, coupled with leg channel and sliding improvements, the Warrior Ritual G4 Pro Senior is the pad for you. The item "SLIGHTLY USED Warrior G4 Ice Hockey Goalie Pads Senior 34 + 1.5 stock Black" is in sale since Wednesday, December 11, 2019.